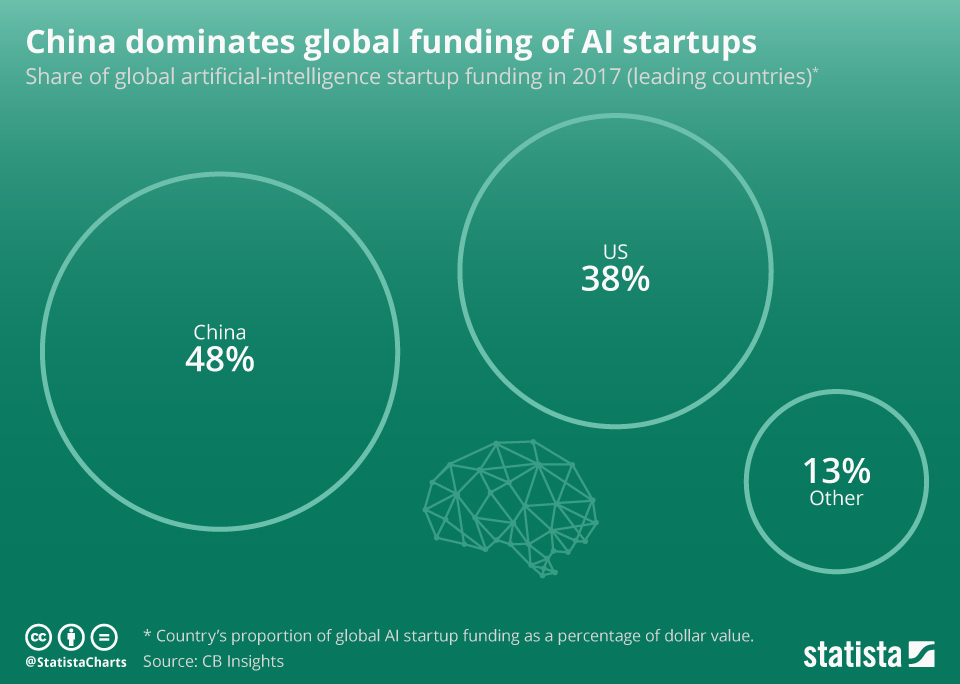 PwC estimates that AI rollouts will add $15.7 trillion to global GDP by 2030. China will capture $7 trillion of that total, to North America’s $3.7 trillion. In one of our previous blog posts, China Rising in Age of Applied AI, we discussed how China’s scrappy entrepreneurs, abundant data, and armies of competent (although not elite) AI engineers gave it an advantage in implementing AI. This week, we highlight several additional advantages the Chinese have:

China’s lack of privacy protection for its citizens is a major accelerant to AI adoption in that country, which has 5X the data and 5X the adoption of AI relative to North America.  For example, China maintains a centralized database of photos for identification, giving it an early lead in facial recognition applications. According to Prediction Machines by University of Toronto professors Ajay Agrawal, Joshua Gans, and Avi Goldfarb, this allows Chinese citizens to authenticate their ride-sharing drivers, authorize money transfers, and access tourist attractions using only their faces. Of course, there’s a tradeoff between privacy and personalization, and between protecting data and making AI smarter and more useful. North Americans may have much better privacy protections and more respect for IP, but the Chinese will capture a greater share of the wealth created by AI and reap the benefits of a better, more personalized customer experience.

China further benefits from a ubiquitous “super app” – WeChat, created by Tencent, one of the world’s largest internet companies. Tencent hosts 55% of China’s mobile internet usage on its platforms. WeChat has over 1 billion monthly active users, who send 45 billion messages every day and connect 410 million voice and video calls each day. Facebook has 2.3 billion monthly active users, but WeChat is like a Swiss Army knife – it is linked to users’ bank accounts and can be used to hail taxis, pay bills, order food, share bikes, buy tickets to events, and pay for transit and medical expenses.

In the AI race, China’s government has also not been sitting still. In 2015, China’s State Council called on mayors and local officials to advance mass entrepreneurship and innovation. Those mayors’ promotions depend on performance evaluations conducted by the central Communist party’s HR department. The officials reacted to the directive with vigour. They established “guiding funds” – government money invested alongside private venture capital. If portfolio companies succeed, the government’s upside is capped at a predetermined percentage, leaving all the remaining upside for the private investors. Money talks, and the effects were dramatic.

"During China's mass innovation push, use of local government guiding funds exploded, nearly quadrupling from $7 billion in 2013 to $27 billion in 2015."

Then, in July 2017, China’s State Council issued the “New Generation AI Development Plan,” calling for funding, policy support, and national coordination in Ai development. It projected by 2030 that China would be the centre of global innovation in artificial intelligence. It set specific benchmarks for 2030, including advancing output to U.S. $150.8 billion for the core AI industry, and to $1 trillion in total, including related industries.

Chinese venture capitalists responded to this clarion call, making up 48% of global AI venture funding and surpassing the US for the first time. China’s investment in AI, chips, and electric cars has been estimated at $300 billion. Chinese cities are contributing along with the central government.

"In line with its 2030 vision, the government of Tianjin, a city a couple of hours from Beijing, plans to build a $5 billion fund to support A.I. development. Money being no object, China is also building a giant $2.1 billion technology park to facilitate A.I. innovation."

China also recently became home to the world’s most valuable AI startup, Sensetime, with a valuation of $3 billion.

In some ways, the US appears to be going in reverse in the AI race, particularly with respect to its stance on immigration:

"The American Association for the Advancement of Science said the White House planned to slash science and technology research funding by 15 percent in 2018. Worse, with the recent immigration clampdown, the United States may soon be struggling to attract and retain highly skilled tech experts from around the world that it needs to keep Silicon Valley at the cutting edge of A.I. research and innovation."

China appears to be on a path to capture the lion’s share of economic benefits from the biggest technological shift since the internet. What can be done? Given US immigration policy and other pressing political issues, the US may be challenged to respond. This is an opportunity for Canada, with its cadre of elite AI researchers (in Toronto, Montreal, and Edmonton), including Yoshua Bengio, Rich Zemel, and Geoff Hinton. The key is to get that elite research translated into AI projects implemented across large enterprises such as banks and telcos. This will in turn kick off more data usable by more machine learning models, thus advancing the state of AI in this country. Once that’s done, Canadian AI startups can target the broader North American enterprise market with their software and models.

What’s required to make this happen? Trust. Trust by consumers that companies will use data in accordance with the permissions users granted them, and trust by companies that their use of AI will not land them on the front page of the newspaper with a headline trumpeting misuse of consumer data. The latter is the #1 impediment to Corporate Canada’s implementation of AI, in practice. Ethical AI standards, such as the one being developed now by CIOSC, will help establish guardrails and guidelines for companies to follow. Eventually, we may even get to the stage where companies pay to use certain consumer data, because it most certainly has value. But at the end of the day there will have to be some bold Canadian corporate leaders, with strong and clear privacy policies, who step out and say how they are using AI and their customers’ data to improve products and services. Like so many plunges into the unknown, someone’s going to have to be the first penguin in the water.

PrevPrevious Blog PostLife With a Tiny Dog
Next Blog PostLearning to Teach or Teaching to Learn?Next