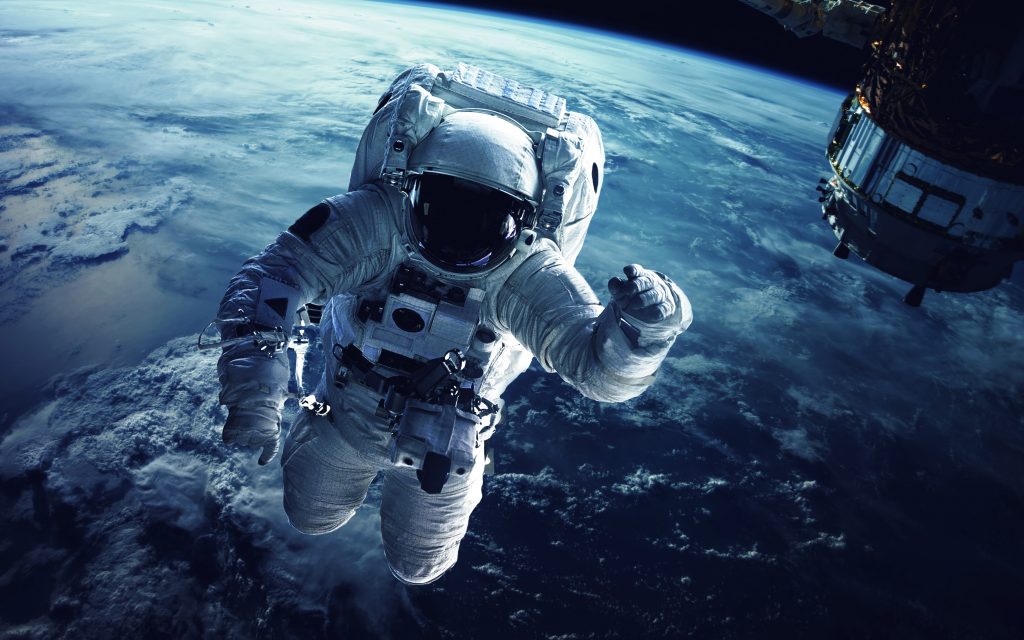 I attended an Aerospace Medicine conference last month with a colleague. Like the name implies, is includes both aviation and space health considerations. I got to attend a luncheon that had the honor of having astronaut Don Pettit speak. While he seemed taller than I imagine that astronauts would be, he was a delightful speaker and obviously someone who enjoys creativity and humor.

Astronaut Pettit has served over a total of a year on the International Space Station (ISS), plus quite a bit of orbit and space walk time. Microgravity does some not very nice things to your body, so in my opinion the fact that he keeps going back for more says a lot about his love of Space. If you want to get a taste of his humor, check out his blog. Here is one about how to host a dinner party in space which I think is delightful.

Astronauts on the ISS have a pretty long day of scheduled work, such as performing experiments for researchers on the ground. Their non-scheduled time is meant for doing things that relax and restore them. For Pettit, he uses this time to goof around with microgravity and let his curiosity run rampant.

The point of his talk was that just because we think we have discovered everything does not mean there is nothing more to discover. There are new frontiers everywhere. The first example he gave was the main viewer window from the ISS. Many astronauts before him had been there and taken photos of the Earth. His way to explore was to take photos with different formats. One was long exposure, another using infrared, another focusing on the spectacular Aurora Borealis. He created new and beautiful photos that had not been done before.

One day he was experimenting to see how granular items like salt and coffee behaved in space. He would put them in a clear bag, shake it up, and see what they did. They would tend to quickly come together into clumps, which is interesting. When he was sharing his videos down to Earth, one of his colleagues was walking by and noticed his results. The colleague exclaimed that scientists had been wondering about how small particles behaved in the realm of planet formation. They already knew that asteroids of mass would attract towards each other. So, Pettit and the relevant scientists got together and wrote a technical paper on the phenomenon.

He built a Van de Graaff static electricity generator out of Legos. Yes, Legos. (All I built from Legos was comparatively boring. But I guess I was 12 then and not a Doctor of Engineering!) And, isn’t static electricity a bad thing with all those electronics in the ISS? Well, apparently it is okay because the video is available on YouTube, and we haven’t heard about anything getting blown up.

Oh, and I love this one. He makes a coffee cup for Space. “Why do they need that?” you may ask. All their drinkables come in pouches. So, being a man who enjoys his morning coffee, he reflects that sipping coffee through a straw is just not the same experience as sitting with a mug of coffee back on Earth and getting to smell the aroma. Aroma is an important part of flavor. So he “borrows” the plastic covers off the ISS safety manuals to make a coffee cup that works in Space. It has a corner edge on one side so it allows the liquid to wick up to the mouth. It has been so successful that they have made multiple versions of it.

All this goes to show a couple of things. Just because you are an adult or have a PhD doesn’t mean you have to grow up. That’s good news! And, exploring with curiosity can be relaxing, a ton of fun, and also great science. Pettit has jointly published a number of technical papers because of his findings. At Pettit’s talk on a show of hands of who uses their curiosity, less than a third raised their hands. I am curious about pretty much everything, so it surprised me to know that not everyone is. Pettit emphasized that the way you can continue to find new frontiers is by using your curiosity. So get out there and play!

BONUS:
There are many experiments from astronaut Pettit that are on YouTube if you would like to see more. There is also a great tour of the ISS by another astronaut. I was surprised how claustrophobically small some of the areas are. I love how her hair sticks out in every direction.

Diana Pederson is a member of Mensa Canada.