Montreal AG – A Good Time Was Had By All 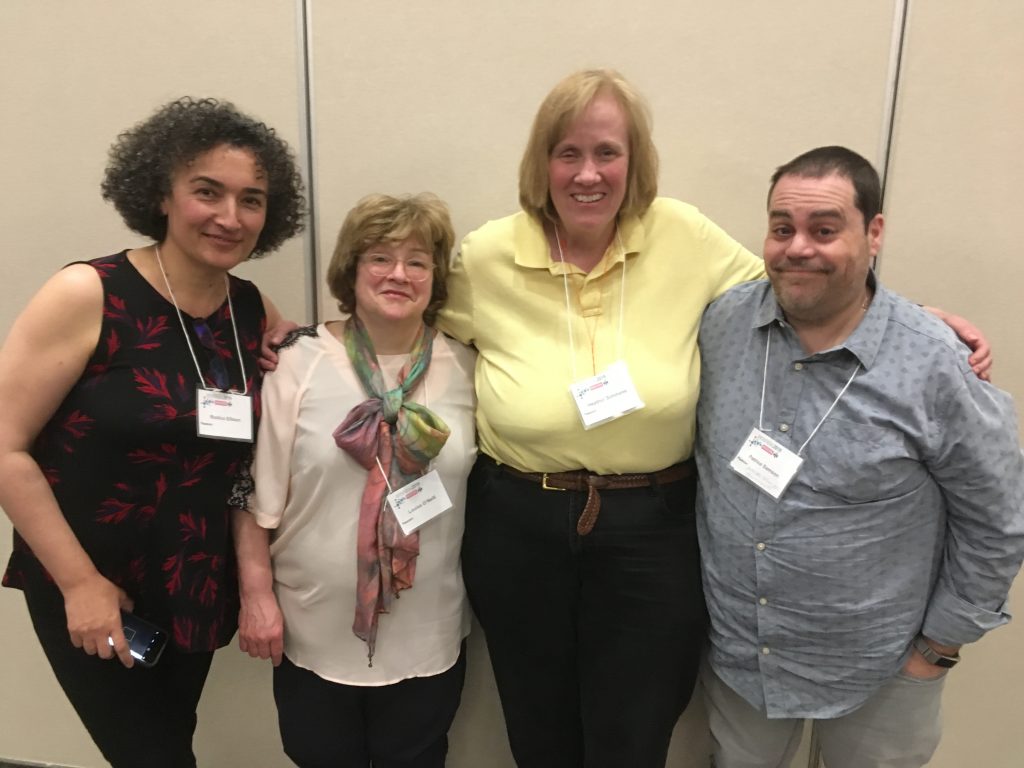 It was great to meet my fellow Mensa Canada social media and web team members in person, finally, at the Mensa Canada Annual General Meeting in May.

There’s Rodica Ellison, who has a wicked way with a puzzle. Louise O’Neill, who keeps us all organized and helms both Twitter and Facebook, me (I blog a bit but mostly format the blog posts of our fabulous group of bloggers), and Pat Samson, who is leading the charge in translating our website into French, among other things. We were missing our fearless leader, Mary Susan MacDonald, who handles Facebook but was out with a bug, and Adrianne Schutt, our technical website and security lead (hey, if she can do it for the Ontario government, Mensa’s gotta be easy). We meet every week on Microsoft Teams (thanks, Louise) for an hour, and it was great to meet in person. Our volunteer jobs are made much easier by our Webmasters, Ben Yap and Jared Brandt, and by our extraordinary team of talented bloggers: Lynne Butler (who also edits and publishes MC2!!), Rony Gao, Carolyn Antonsen, Diana Pederson, Stefano Lodola, Blair Roblin, and Ben Yap. There’s no writer’s block when the load’s shared. Such talent.

We all met up for the first time at the Mensa AG dinner, which is always a good time for those able to stay up past 9:30. Louise assures me it was fun. I was safely back at the Hilton Garden Inn by that late hour. Many stayed in McGill Student Housing, shortening their commute considerably.

My friend Louise helped me out with some of her memories of the event, since I am a terrible note taker and can’t remember what I had for lunch, much less last month’s event.  To wit, in Louise’s own words:

“The location in the heart of downtown Montreal was unquestionably ideal — within walking distance of numerous attractions and iconic Mount Royal. Full disclosure: I used to live and work in the area, and it was personally satisfying to walk around and see what had changed and what had stayed the same in the neighbourhood, known colloquially as the McGill Student Ghetto.
The speakers were top-notch. They were not only knowledgeable and interesting, but they were also engaging presenters. It was a nothing short of a thrill for me to hear and meet two of my favourite podcasters: Science Communicator Jonathan Jarry and Dr. Christopher Labos. Their podcast is called Body of Evidence, and the tagline is “Medicine that tastes funny, science made easy”. Their focus is the alarming phenomenon of medical misinformation being spread virally on social media, why it is misleading and harmful, and what might be done to counteract it. Jonathan Jarry is also a frequent guest on the podcast of the McGill Office for Science and Society called The Dr. Joe Show. Here are links to their work:
Douglas Beaton gave ‘ … a virtual guided tour at the confluence of two great passions for many of us: art and science.’ His eclectic, wide-ranging background, which surely endears him to many Mensans, spans engineering and bridge-building to musical acoustical design, with some history to boot. Thanks to Mr. Beaton, I now understand the difference between “reverb” and “echo”. And I know why the Ironworkers Bridge over Burrard Inlet in Vancouver, which I have travelled over, is so called, at least unofficially.
Igor Sokolov covered what one might expect to be a dry topic — applying hard science to social studies, a “seemingly humanitarian field” — in a surprisingly entertaining way. He offered enlightening audience engagement activities and interesting approaches to quantifying social behaviours, including his own “Quantify the World” project which everyone can participate in: http://quantify.world.”
Come join us next year and see what Louise is talking about! I’ll try to hang in until the fun gets going next time.
PrevPrevious Blog PostPower of Music Appreciation
Next Blog PostCommon Sense Student PrivacyNext