An article by Brian Katz and Margaret L. Haliburton, who were both there.

When Lance Ware formed Mensa just after the war it was strictly a British Isles affair. If the odd member joined from elsewhere, they were welcomed but there were no local activities. In 1960 the British group sanctioned a meeting in New York City and an organisation for North America was born.

Later, Peter Urquarht, a Mensan from Scotland who had immigrated/emigrated (take your choice) to Canada and found himself in what he described as an intellectual wasteland. His work and home life did not give him the opportunity to meet people who were his intellectual equals. There was no Mensa group in Toronto, nor, as far as he could find out in Canada.

He decided the best way to recruit was to advertise in the local papers.

The editors of those papers thought differently; they presumed that he was trying to recruit for sexual purposes and would not print his ad. Eventually his ad was printed and Henry David Yee of Toronto wrote the test (mailed and marked from New York), qualified and in 1962 became the first Canadian to write the test in Canada under Canadian supervision. The Canadian District of North American Mensa was formed!

Laurier L Pierre, Lecturer at the June, 1967, North America/Canada Mensa AGMHenry was elected as Local Secretary by acclamation as the only two members at the time were Henry and Peter! Our numbers grew and Henry eventually became Canadian Vice Chairman of what was still legally a New York corporation.

In 1966, a committee, consisting of Fred Fishell, his wife Dr. Fishell, Gordon Haliburton, Peter Urquarht and one other was set up to form a Canadian Mensa in time for the nation’s Centennial. The Committee spent many hours labouring over the legal problems, constitution, make up number of members, voting schedules international requirements, North American requirements-you name it. Remember-if you put three Mensans in a room you end up with four opinions, five religions and six churches!

This hard work culminated in the North American Mensa Annual General Meeting (AGM) held in Montreal P.Q. on the penultimate weekend of June 1967. The business of the meeting was conducted up to a certain point in the agenda when all the Canadians present were invited to step to one side of the floor and conduct their own elections for a new organisation called Mensa Canada. Henry David Yee was elected first Chairman.

‘Course all this did not come about without a lot of preparation. Margaret Haliburton did most of it. At the time, her husband and both children were Mbers-jokingly called our “First Family”. In the preceding months she had received only a rather faint print-out of the total North American membership list and the office staff in New York did not seem to be able to isolate Canadian addresses on it. They seemed to think that Saskatchewan was some western U.S. province (State? Territory? Protectorate?)

Margaret persevered in her sophisticated well equipped office-the dining room-with the print out, file cards, pen and pencil-and lots of cardboard boxes for storage. With a lot of determination she set about the job of finding, listing and contacting some 600 odd Canadian Mensans (that’s odd as in number– not just odd Mensans!) 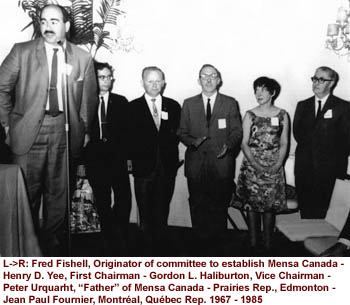 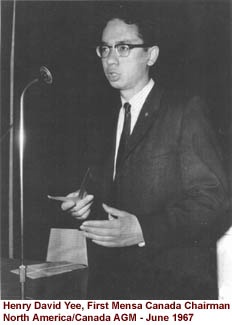 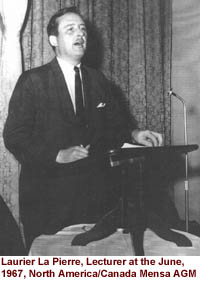 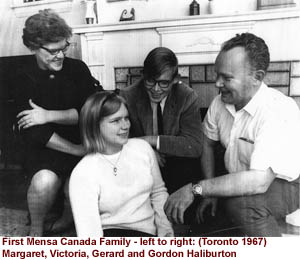